I recently saw the movie ‘Margin Call’ – which is a great look at a company which starts a financial collapse in the market by selling the biggest load of crap debt packages in order to stave off their own corporate financial meltdown. It is quite a Shakespearian tragedy, where even the most principled people involved cannot ultimately turn down the buckets of money which buy their varying silences or culpabilities. The layered packages they sell with good debt hiding a festering filling of junk debt kind of reminded me of some of the worst kinds of processed foods, where brightly colored packaging and chemical taste enhancers disguise the reconstituted crud within, the goodness having been leeched out of the food’s original form before some vitamins were added to make it look acceptable.

Food Banks know a lot about this kind of food. It’s the stuff people have been donating to us for decades, and which we have been cheerfully accepting. If some bold new experiment in food science did not win the hearts of the great American public, then sure enough, a truck would show up at the food bank with the excess.

Often we are in the situation where we have to take the crap to get the better food that is offered alongside it as one donation (not just financial traders use this approach, I guess…).

Who remembers this nostalgia item…

Remember, if your cult leader offers you a swig of the blue stuff, politely decline.

The provision of highly processed food really hasn’t been much of an issue in the past, because we had to fill bellies, and because we provided the justification that we only provided a percentage of a person’s food intake. (Like they were really eating good food elsewhere or somehow purchasing it from empty pocket books, while they were saving the junk element of their diet for food from the food bank).

Now don’t take offense! Food banks provide much wonderful food and much wonderful fresh produce (which however we are still in the habit of using as a fig leaf to justify the crap that goes out). Because we have done many wonderful things, I think we can all feel good enough about ourselves to take a long hard look at the food that we’ve been dealing in, and how we might get around to cajoling, demanding, insisting that the food we both get donated and increasingly purchase is something that you might want to take up residence in your stomach.

We need to keep working with Feeding America in improve our ability to express the ‘gap’ that our services are filling. We’ve seen the weird acronym PPPIP (Pounds Per Person In Poverty), where we’re supposed to give a person 96lbs or whatever of food per year to help them keep body and soul together. It always sounded like one more weight for people to carry to my way of thinking. Now we have the ‘Missing Meals Gap.’ This is an improvement, but there are still two big (for me) issues. Firstly, the ‘meal’ is not a real meal, but a form of reckoning whereby we can break down poundage of food and equate it to a meal. So in theory we could be providing a meal that was sugary vitamin water and a Rice Krispie treat. Not much use. Secondly, the idea of meals can be negative to some contributors who have the idea of people sitting around waiting to have a meal cooked for them, rather than actually what it really usually is, which is someone getting some food for their family so they can try and cook their own meal in the short space of time between one job and another.

Dr. Elaine Waxman from Feeding America fearlessly wrangles the data like the Lone Ranger, and so I am confident that we will be steadily refining our way of assessing the need and how we are filling it.

And please don’t think we’re getting into elitist food snob area here, people demand healthier food. I have found nutrition an issue among concerned citizens in every community, at every socio-economic and educational level in our service area. This has gone way beyond wagging fingers to eat your vegetables. People instinctively know there is something wrong with what we are shoveling into us and how many are living to eat, not eating to live.

So are you ready to take a cold hard look at what we’ve been distributing, or do you want that last Twinkie first? (On second thoughts, the Twinkie will last…longer than you, my friend)

Now this is where we have to get scientific for a moment, so put on your white coats.

Hunger does not come from our little internal food warehouse aka the stomach – actually hunger and appetite are controlled by chemicals in the brain. Ghrelin and Leptin. Insulin is also important. 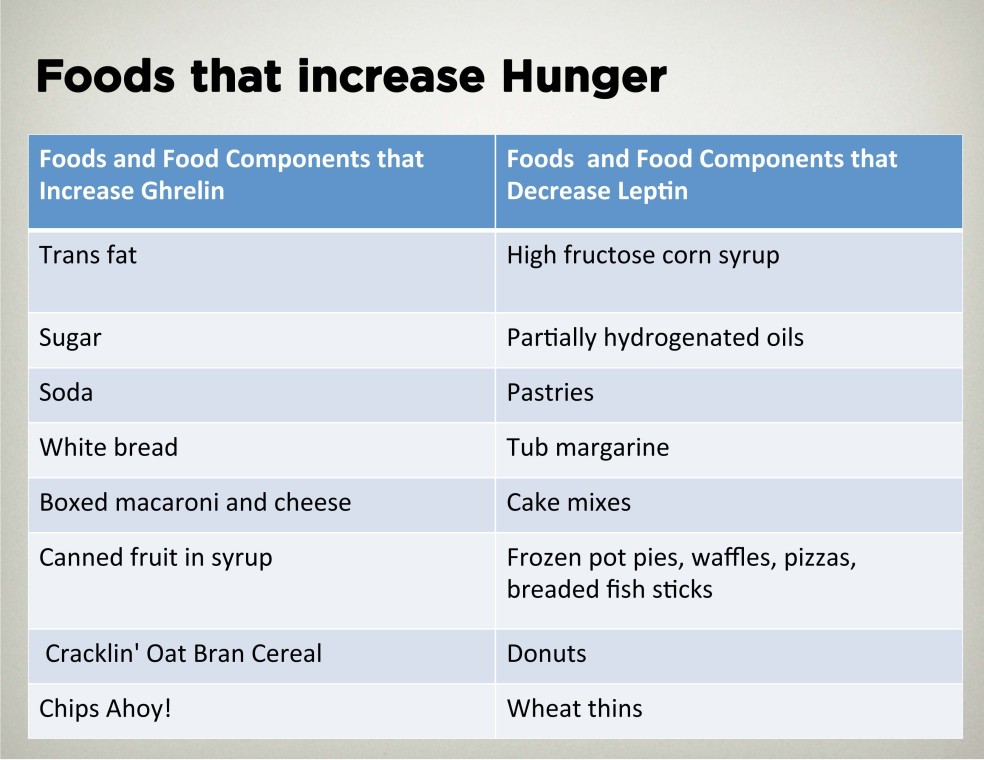 Those foods above are the foods that are increasing the bad ghrelin and decreasing the good leptin. Oh Sh*t, it kind of looks like a fair chunk of the average food bank inventory list.

Insulin is also an issue, creating a spiral of hunger. foods that can be quickly digested and absorbed spike blood sugars which in turn spike insulin

This high level of insulin works against us and drops our blood sugar too low. We feel shaky, weak and hungry and seek out food again

Better foods will release a steady stream of sugar into our blood stream and lower blood sugar hunger pangs, as shown in the graph below.

So, in terms that I can understand – which means you definitely can – that’s why hunger and obesity co-exist.

We contain a lot of resources in our food banks to prevent this from happening – as long as we can source the right food and get people to want to eat it.

2 thoughts on “Have We Been Making People Hungrier?”